a type by any other name 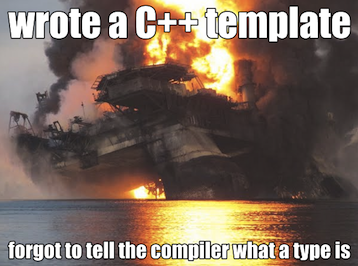 There are only two hard problems in computer science:

This is a post about naming things. Consider the following code:

Will this code compile?

No, because the compiler doesn't know that T::iterator refers to a type.

You need to use the typename keyword, like so:

Why is typename necessary?

T::iterator is called a dependent name, because it depends on what T is. Most of the time, dependent names in templates are not assumed to be types.

Why can't the compiler assume this dependent name is a type?

Because T::iterator might not refer to a type. Here's an example of a potential T where T::iterator isn't a type:

Why can't the compiler figure out which names refer to types automatically?

In the above code, does the body of baz:

If all we've seen is the template, we don't know. It could be either.

Why doesn't the compiler delay processing the template definition until it sees an instantiation?

Good question. Here are some reasons why the compiler parses template definitions when it sees them:

TL;DR: Use the typename keyword with dependent names in templates to indicate those names are types.